Welcome to the obligatory Docker 101 post. Before I dive into more technical posts on this subject, I thought it would be worth the time to explain what docker is and what I find exciting about it. If you’re familiar with Docker already, there likely won’t be anything new here for you, but I welcome any feedback you have.

One of the more common explanations of this architecture is shown in the following image: 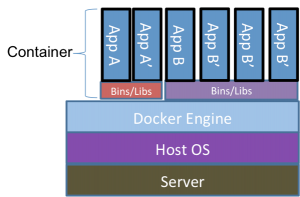 This image is a bit problematic in that it doesn’t truly represent what you actually see on a docker host, but we’ll save that for a later blog post. For now, trust that the above is a very simplified view of the docker world.

So why containerization and why Docker in particular? There are a number of benefits that containerization technology provides. Among these are immutability, portability, and security. Let’s touch briefly on each of these.

Portability refers to the ability to move containers between disparate systems and the container will run exactly the same, assuming no external dependencies. There are limitations to this such as requiring the same cpu architecture across the systems, but overall, a container can be moved from system to system and be expected to behave the same. In fact, this is part of the basis of orchestration and scalability of containers. In the event of a failure, or if additional instances of a container are necessary, they can be spun up on additional systems. And provided any external dependencies are available to all of the systems that the container is spun up on, the containers will run and behave the same.

Containers provide an additional layer of security over traditional virtual or physical hosts. Because the processes are isolated within the container, an attacker is left with a very limited attack surface. In the event of a compromise, the attacker only gets a foothold on that instance of the container and is generally left with very little tooling inside of the container with which to pivot to additional resources. If an attacker is able to make changes to the running container, the admin can simply destroy the container and spin up a new one which will no longer have the compromised changes. Obviously the admin needs to identify how the attacker got in and patch the container, but this ability to destroy and recreate a container is a powerful way to stop attackers from pivoting through your systems.

There’s a lot to be excited about here. Done correctly, the days of endlessly troubleshooting issues caused by server cruft are over. Deployment of resources because incredibly straightforward and rapid. Rollbacks become vastly simplified as you can just spin up the old version of the container. Containers provide developers a means to run their code locally, exactly as it will be run in production!

I’ve been working with containers for about 3 years now and the landscape just keeps expanding. There’s so much to learn and so many new tools to play with.

Finally, I’m going to leave you with a talk by Alice Goldfuss. Alice is an engineer that currently works for Github. She has a ton of container experience and a lot to say about it. Definitely worth a watch.

Prediction is very difficult, especially about the future.

Baptism of Fire
by Andrzej Sapkowski